Malacca: A 45-year-old woman has been apparently using sanitary napkins as part of a black magic ritual to fleece unsuspecting housewives into giving away their jewellery.
To date, there have been at least five police reports lodged against her for allegedly deceiving several women into handing over about RM250,000 worth of ornaments.
A 29-year-old housewife from Ujong Pasir said she had only recently known the woman and saw a pile of used sanitary pads in one of the woman's bags.
"She was at my house about a month ago, persuading me to hand over some of my belongings," said the victim.
"I sensed a pungent stench from one of several bags she carried and talked her into telling me what it was. I was startled to see piles of used pads in one of the bags," said the housewife, who declined to be named. She claimed she was then hypnotized into giving the woman a gold ring and a chain totalling RM5,000.
Another victim, M Dhanalechmi, 38, from Taman Seri Kandang here, claimed she fell prey to the black magic woman last August and lost about RM100,000. "The woman touched my left wrist, lacing it with a certain portion. I was under her spell immediately and didn't object to her demands," said Dhanalechmi, adding that she gave away her jewellery "willingly".
Worse, Dhanalechmi introduced her sister, Tamilchelvi, 36, from Semabok, to the woman and she, too, became a victim when she was persuaded to part with jewellery worth RM60,000.
"The woman told us that the valuables would be kept in safe deposit lockers at a bank and that we could earn monthly interests," said Dhanalechmi.
"I was only after a few weeks that we realised we had been conned," she said, adding they had lodged police reports against the woman.
In a recent development, Datuk Gan Tian Loo said a 52-year-old pawnbroker had lodged a police report on Dec 21, claiming that the woman had cheated him of some RM80,000 worth of jewellery. He said the woman had since gone into hiding when she realised that the police were hot on her trail.
Gan said in 2006, a 41-year-old woman had also lodged a police report against the same woman for duping her of her jewellery. Telling others to beware of the sanitary pad black magic woman, he said she could resurface after her brief hiatus.
"We advise housewives to alert the police if approached by a woman carrying several bags," he added.
Apparently, the woman was seen, on several occasions, rummaging dumps in search of used sanitary napkins.
The Star, Wednesday 4 January 2012
Dicatat oleh Marzuki Ismail di 4:44 PTG Tiada ulasan: 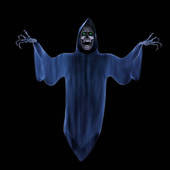